The natural gas market is growing faster than many in the industry ever believed it could. Yet, as more and more Americans have access to this abundant resource, coal remains the most-used electricity generation source in more than a third of U.S. states. 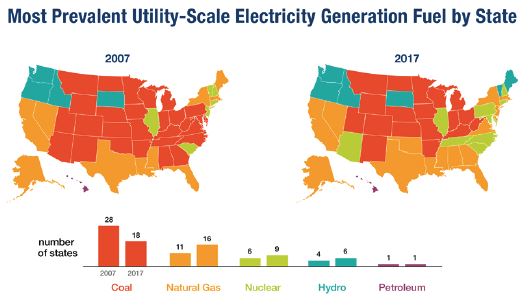 As the saying goes, "Reports of coal’s death have been somewhat exaggerated."

However, coal has some serious competition for the top spot with the number of states primarily using natural gas growing from 11 to 16 over the past 10 years. Georgia, Alabama, Virginia and Oklahoma have all moved from coal to primarily natural gas. New Jersey had been powered mostly by nuclear energy but has since moved to natural gas for its electricity generation.

Right now, it appears coal may be winning the electoral college of energy generation with more states using it as its primary source, but natural gas is pulling ahead in the popular vote. Across the U.S., natural gas provided 32 percent of total electricity generation in 2017, which was more than coal’s 30 percent.
Aside from fossil fuels, nuclear power saw an increase from six states in 2007 to nine in 2017. In renewables, hydroelectricity is currently the most prevalent. Six states, including newcomers Maine and Vermont, use it as their primary energy source.

Coal isn’t dead like some say, but natural gas continues its long-running increase in popularity. At this point, despite natural gas’s momentum, coal remains a prominent energy source here in the U.S.

For the most part, natural gas is happily taking its place in states across the Mid-Atlantic and Southern U.S. As pipeline construction continues, it’s likely even more states will turn more toward natural gas in the not-too-distant future. Maine was the only state that saw its natural gas utilization drop from its primary position over the 10-year period.

Though natural gas is trending upward and coal is trending somewhat downward, it’s becoming increasingly clear that there may not be a singularly dominant form of electric generation in the future. However, for a variety of reasons – from market dynamics to regulatory reform – it appears coal, natural gas and fossil fuels in general will remain staples of our power generation for a number of years to come.