Last week the U.S. Energy Information Administration (EIA) released its latest report on the inventory of electric generators in the U.S. According to a survey of developers and power plant owners, 23.7 gigawatts (GW) of new capacity additions and 8.3 GW of capacity retirements are on the way in 2019.

The sources of this new capacity should be of no surprise to anyone. Of the utility-scale capacity additions, more than half will come from renewable energy sources. Wind will represent a total of 10.9 GW of new electric energy capacity, solar photovoltaics will represent 4.3 GW and natural gas will be 6.1 GW from combined-cycle plants and 1.4 GW from combustion-turbine plants. More than 50 percent of the capacity retirements resulted from the retirement of a single large coal facility in Arizona. 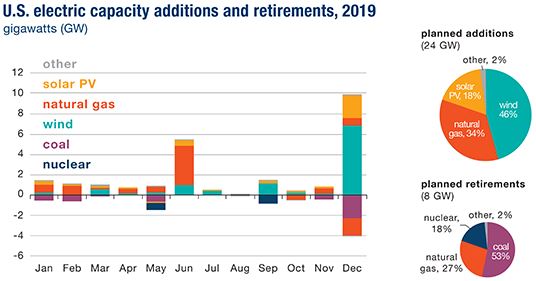 The adoption of renewable energy sources has been gaining momentum world-wide for years. While the development of these renewable energy plants has traditionally relied on government tax subsidies to be financially viable, decreasing technology costs are making onshore wind power and solar increasingly more attractive. BP’s energy outlook report released last year indicated that 17 percent of the world’s energy growth in 2017 came from renewable sources – good enough for the largest increase on record.

The affordability, access and ample supply of natural gas continue to make it an attractive energy source. And as we found at our recent Winter Outlook for Natural Gas event in mid-January, the Natural Gas Supply Association (NGSA) expects neutral price pressure overall on the natural gas market in winter 2018-2019 compared to last winter. So, it looks like good times are on the immediate horizon still for the abundant resource.

Lawmakers on the state, federal and even international levels have touted the environmental benefits of renewable energy.

New York, California and Hawaii have all recently committed to the goal of transitioning to 100 percent renewable power by the year 2040. In Pennsylvania, Governor Tom Wolf recently launched the “Pennsylvania’s Solar Future” plan, which identifies 15 strategies that can achieve a 10 percent increase in solar-powered electricity and reduce greenhouse gas emissions 26 percent by 2025. Internationally, the Paris Agreement is taking on an ambitious plan to reduce carbon emissions through a transition to renewable energy sources and even attempting to discourage international banks from investing in carbon-emission-producing sources.

Many have rightfully called into question the prospect of going 100 percent renewable in such a short timeframe, especially when renewable energy may not be feasible or economical in large parts of rural America and around the globe. Access to natural gas is growing still, and trends indicate it will remain the most widely available and viable resource for a majority of the country for a long time.

But still, the fact remains – renewable energy sources are likely to continue to proliferate. Tax subsidies stemming from government support, the shrinking costs of production, and the positive impact on the environment are making investment in the production of alternative energy sources increasingly feasible and economically favorable.

While renewable energy sources still represent a small segment of total production and natural gas remains king, traditional energy producers are starting to pay closer attention to these continually emerging sources of energy. Without a renewable strategy, energy companies run the risk of obsolescence in a global energy market that continues to evolve. The long-term future of energy appears headed in some respects toward renewable, and energy companies must consider their next move or risk being left in the past.