The Energy Edge: U.S. Gas Producers Up to Challenge

As the Trump administration has pushed for increased natural gas exports to Europe, some have questioned if U.S. production could match the demands. But the oil and natural gas industry has quietly proven that it’s capable of getting the job done as it continues to increase exports to Mexico – with more on the way as the industry seeks to de-bottleneck the burgeoning Permian basin. 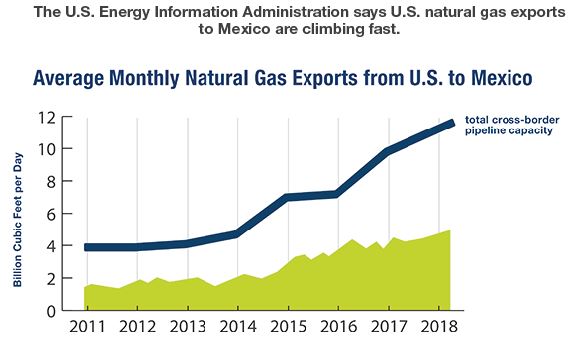 U.S. natural gas is rapidly flowing across the Rio Grande at a rate never seen before thanks to stable domestic production and the commissioning of multiple key pipelines in Mexico.

What’s facilitating this massive growth is clear. The boom in horizontal drilling and hydraulic fracturing has made extracting natural gas easier, more predictable and less expensive.

Mexico has long been the leading purchaser of U.S. natural gas. Still, the uptick in exports to our neighbors to the south over the last few years has been significant. The positive impacts of this increase should help to settle any lingering international debates about the ability of the U.S. to become a leading international exporter.

The increase in exports has not upended energy markets. It hasn’t had negative domestic or international economic effects. And it hasn’t negatively impacted trade, as the recently announced new trade deal with Mexico demonstrates. The increase in exports has led to a boom in available jobs in the Permian basin that producers can’t fill fast enough.

But it doesn’t end in the Permian, moving more gas to market from the Permian has the ability to help producers across the U.S.

There will always be naysayers, but the industry has quietly demonstrated its ability to make international exports work.