The Energy Edge: Marcellus Country is Messing With Texas

It’s a development that may have been inconceivable a decade ago, but one that’s a reality in today’s U.S. energy picture. And it doesn’t show signs of changing anytime soon. Today, the Marcellus Shale area of Pennsylvania, Ohio and West Virginia produces more natural gas than Texas.

Texas has traditionally been the biggest player in U.S. natural gas production, and when measured against any other individual state, that’s still the case. Even Pennsylvania, which increased production from less than 0.2 trillion cubic feet in 2000 to more than 5 trillion cubic feet last year, still produces less natural gas than the Lone Star State. But when taken together, the latest monthly EIA numbers show Appalachian Region states produced more natural gas than the Permian, Eagle Ford and Haynesville regions combined.

Pennsylvania, Ohio and West Virginia make up only a fraction of the geographic area of Texas (115,000 square miles vs. more than 267,000 for Texas), but they’ve become just as critical to the nation’s energy industry. These four states now account for more than half of domestic natural gas production. 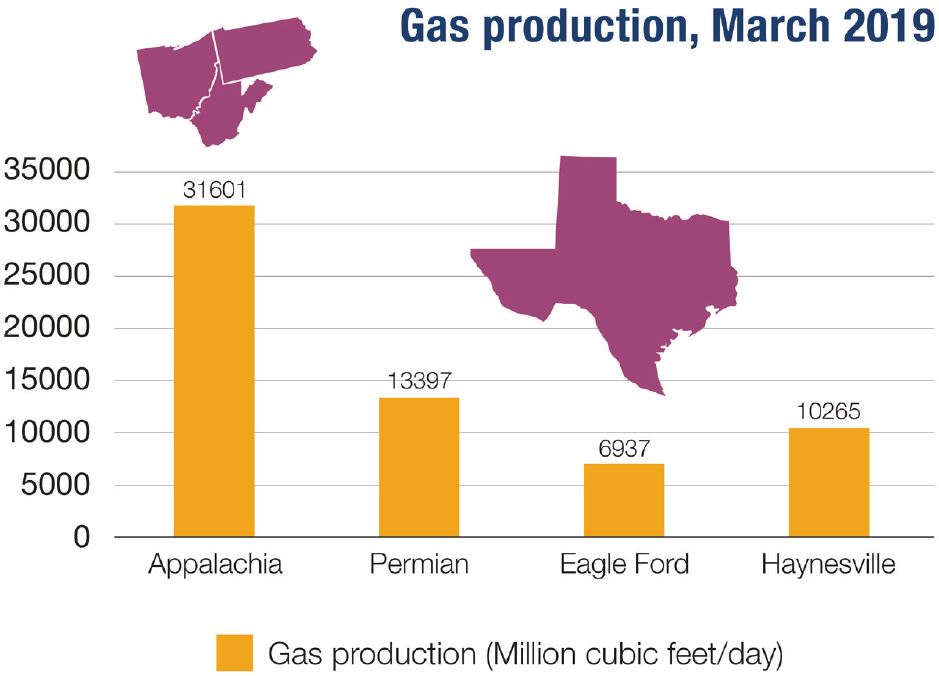 The northeastern tri-state area is reshaping the U.S. energy picture in a big way. Companies are using local workers and engineers to apply best practices developed and refined in Texas to create significant economic impact and further industry innovations in Marcellus states. Just look at the Pennsylvania Shell cracker plant, which is ahead of schedule, and the new preparations for the potential PTT Global cracker plant in Belmont County in Ohio.

And this is only the beginning. Natural gas production in the East Region is projected to quadruple between 2013 and 2050, according to a report from the Office of Fossil Energy issued last summer. Appalachian natural gas plant liquids production is slated to increase over 700 percent from 2013 to 2023. This time last year, Pennsylvania Governor Tom Wolf, Governor Jim Justice of West Virginia and Governor John Kasich of Ohio announced the extension of the tri-state agreement to collaborate on maximizing natural gas resources in the Appalachian Basin.

While it’s hard to overstate the magnitude of this growth and its significance, it’s important to note that rising natural gas production is happening nationwide, not just in Marcellus Country. Production is up in Texas natural gas regions and in the Midwest and Western regions, too.

America’s relatively newfound energy independence is paying tremendous dividends for the industry and the nation as a whole. The incredible natural gas growth in Pennsylvania, Ohio and West Virginia is driving that independence. As a result, the U.S. is poised to be a consistent net energy exporter by 2020, and the energy industry feels more secure than it has in decades.

The natural gas renaissance in the Appalachian Basin is creating good jobs and more opportunities for residents in those states. It’s driving infrastructure investments and industry advancements. Pennsylvania, for example, is working to streamline the path to additional projects and prosperity through an improved permitting process. As the boom continues, states that have regulated their way out of this economic prosperity may one day be forced to rethink their stance.

As is to be expected, the impact of Marcellus Country’s growing natural gas influence will continue to be felt throughout the energy industry. Output in Pennsylvania, Ohio and West Virginia is impacting natural gas prices. Those prices, according to the EIA, will be a deciding factor in our nation’s electricity generation mix in the years to come. How our nation develops and embraces renewable energy sources, and transitions away from traditional sources will be decided by natural gas. As natural gas production continues to increase, the entire energy industry would be wise to keep one eye on Texas – and one eye on Marcellus Country.