FIND AN ATTORNEY FIND AN OFFICE
BACK TO INSIGHTS

The Energy Edge: After Shale Insight 2018, One Thing is Perfectly Clear

Today’s Takeaway: Investment in the U.S. chemical and plastics industry resulting from domestic shale gas has now surpassed $200 billion, according to the American Chemistry Council (ACC).

ACC reports that over the past eight years, 333 chemical industry projects made possible by natural gas from shale formations have been announced with a total estimated value of $202.4 billion. Of those projects, 53% of the investment has been completed or under construction and 41% are in the planning phase.1 Of the total value, 68% is direct foreign investment or includes a foreign partner. 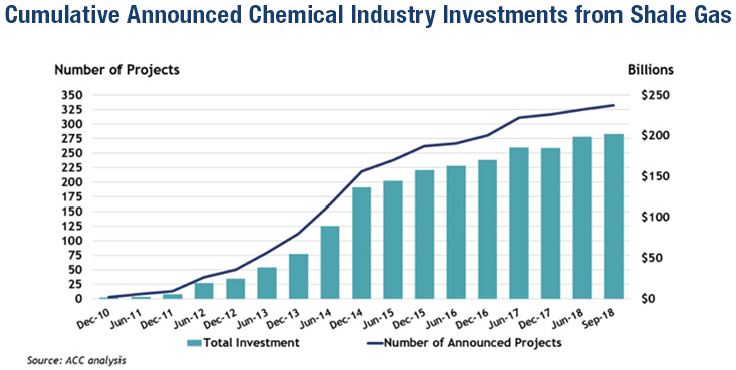 Much of the mainstream talk surrounding natural gas, and specifically natural gas extracted from shale formations, has been around its ability to power homes and communities across the country. It’s a more easily understandable concept for most people, after all, and one that impacts the general population on a wider scale. Much less is known about natural gas’s tremendous impact on the manufacturing industry.

Analysis from the ACC shows that the $200 billion-plus in capital spending as a result of shale gas could lead to nearly $300 billion per year in new chemical and plastics industry output. It’s estimated it could support 786,000 jobs across the economy by 2025, including 79,000 chemical industry jobs, 352,000 jobs in supplier industries, and 355,000 jobs in communities where workers spend their wages.

Natural gas is powering more than just Americans’ homes. It’s powering the products they buy and the jobs in which they work. Natural gas and natural gas liquids (NGLs) are not only helping the U.S. chemical industry, but they’ve become key to allowing the industry to remain internationally competitive. Because of the lower cost of NGLs, it gives U.S.-based manufacturers a leg up on their overseas competitors (who mostly use oil-based naphtha as their main feedstock).

Producers have as much to gain from downstream development as the manufacturers themselves. The more natural gas grows, the more opportunities there will be for all kinds of industries and investments to be made in companies based here in the U.S. One of the keys to unlocking the full potential of the natural gas ecosystem will be for producers, downstream manufacturers, and others with an interest in the industry, to collaborate and work together by forming new groups and formal partnerships.