In what many may have called counterintuitive, U.S. energy consumption hit a record high last year while greenhouse gas emissions have simultaneously chartered a downward trend since 2005. Even more amazing is the fact that U.S. energy expenditures per unit of gross domestic product have recently been the lowest in about a half of a century.

U.S. energy production, usage and exports are up, while emissions and costs are down by historical standards.

Americans consumed a record-breaking 101.3 quadrillion British thermal units (Btu) of energy in 2018, up 4 percent from 2017 and just a hair above the historic mark previously set in 2007. Every major energy source saw consumption increase in 2018, with the exception of coal, according to the U.S. Energy Information Administration.

Last year, the U.S. became a net oil exporter for the first time since the 1940s, will remain a net energy exporter through at least 2050, and is leading the world in total greenhouse gas emission reductions.

Regardless of where that energy is coming from, Americans are having their energy cake and eating it too. 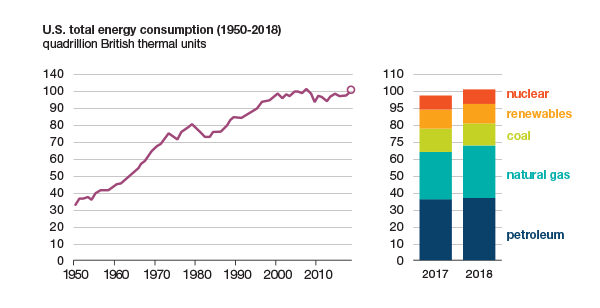 The three energy sources primarily responsible for this new all-time high in energy consumption include petroleum, natural gas and renewables. All three of these sources saw significant increases over 2017, with natural gas leading the way in terms of growth.

The industrial sector was largely responsible for the rise in petroleum use in 2018, along with demand for petroleum diesel and jet fuel in the transportation sector. Natural gas remains a staple of American homes, as the primary driver of natural gas’ consumption growth came in response to weather-related factors with the increased use of space heaters during the winter and air conditioning during the summer.

And as is probably obvious by now, domestic energy production has been able to meet this growing demand as production of natural gas grew by 11 percent in 2018. This growth was the largest annual increase in production on record and reached a record high for the second consecutive year.

Despite some energy policy over the past decade that has worked to restrict energy production in order to reduce greenhouse gas emissions, it turns out that these record emissions reductions have actually occurred during a true energy production, consumption, and export boom.

Even with the U.S. energy industry having never been bigger or producing more, greenhouse gas emissions have consequently declined across the U.S. since their peak in 2007. Although early reports have indicated a slight uptick in greenhouse gas emissions last year as the economy continued to grow. The White House recently signed two executive orders that, if passed, are set to accelerate oil and gas pipeline construction as new technology and innovation are making the production of oil and natural gas less expensive and more accessible than ever before.

The U.S. energy industry is clearly having a moment. With energy production, consumption and demand reaching all-time highs, public- and private-sector leaders now face a historic opportunity to continue this momentum. By facilitating additional energy projects across the country, the U.S. can remain a global energy giant for decades to come.