The Energy Edge: Energy Security Risks Are At Their Lowest Point in More Than Two Decades

Today’s takeaway: Energy security risks are at their lowest point in more than two decades

The U.S. Chamber of Commerce’s Global Energy Institute (GEI) recently released the 2018 edition of its U.S. Index of Energy Security Risk. The report offered a downright glowing review of the state of U.S. energy security risk, which has steadily declined over the last six years. In 2017, GEI’s total energy security risk metric fell to 77.5 – the lowest level since 1995.

The source of this sustained optimism around energy security risk is no secret. The shale revolution, including hydraulic fracturing, horizontal drilling, and advanced seismic imaging, is far and away the largest contributing factor to America’s increased energy security. Improvements in vehicle efficiency and a 14 percent decline in emissions also contributed to this year’s record-low risk score. As a result of these converging factors, the report crowned the U.S. a “global energy superpower.”

This continuing push toward energy independence powered by unconventional oil and natural gas production is creating a more stable, predictable energy industry domestically. For the first time in decades, the U.S. become a net petroleum exporter for a time last year, and remains secure in its role as a net exporter of coal and natural gas. The U.S. Energy Information Administration’s (EIA) Annual Energy Outlook 2019 projects that the U.S. will become a stable net energy exporter by 2020. America’s increase in natural gas production even received a shout out from President Trump during the State of the Union Address. 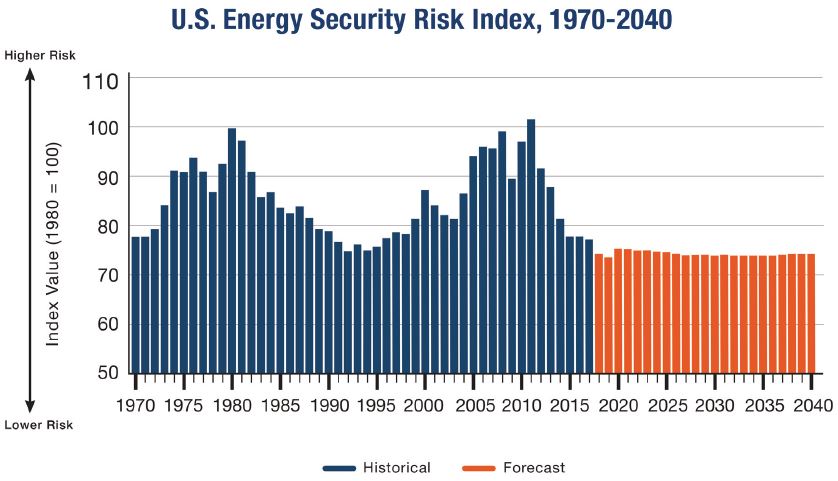 This rise in domestic production has been concentrated in the Appalachian basin. Other states, including North Dakota, Colorado and New Mexico, have become larger suppliers of crude oil and have seen the expected economic benefits of those increases. Just consider how little effect the recent polar vortex had on the power grid in the Northeast U.S. – the industry was able to manage the heightened demand without much issue at all.

The surge in domestic energy production, coupled with increased efficiency, is creating a bullish industry outlook with security risk as a key component.

When it comes to energy, the U.S. has more control over its own destiny than it’s had in decades.

GEI analysts expect that to continue. New record lows in security risks are projected through 2040. Geopolitical energy security risks declined for the sixth straight year after a period of record risk and instability following the September 11, 2001 attacks.

Rising oil and gas production domestically better positions the industry to weather uncertainties abroad around geopolitical threats as well as increases in pricing and volatility. However, the report warns against complacency. Shifts in political sentiment that lead to changes in policy or investment could derail the low-risk environment in short order.

There are many groups working to bring about that shift through efforts to halt and delay projects. Another GEI report, Infrastructure Lost: Why America Cannot Afford to "Keep It In the Ground," quantifies the impact of these efforts, including a $57.9 billion hike in project costs and as many as 730,000 job opportunities lost. In the face of these economic disruptions, the GEI calls for reforming and streamlining government permitting processes around one simple rule – no project should take longer to approve than it takes to build. At least one state, Pennsylvania, is working to address that.

The threat of hostile policy changes and geopolitical upheaval is ever-present, but when it comes to energy security in 2019 and in the years to come, the news could not be better. American energy companies can feel confident in the boom the shale revolution has started and look for opportunities to maximize the benefits of the stability and success that energy is currently experiencing.