On November 15, 2018, the Council on Legal Education Opportunity, Inc. (CLEO) hosted the CLEO Edge Awards Gala in Washington, D.C. — one of several events held to celebrate the 50th anniversary of the organization. Buchanan sponsored the event which was attended by Amy Miller, Michael Strazzella, and Dani Rosetti. Our client AccessLex was also a sponsor of the event.

Amy Miller is pictured below with John Murdock, Chair of the National Association of Minority and Women Owned Law Firms (NAMWOLF). 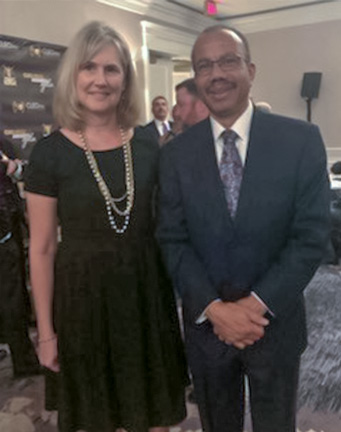 Founded in 1968 when the number of lawyers of color was less than one percent, the Council on Legal Education Opportunity (CLEO) has worked to increase the number of lawyers from diverse backgrounds for the last half century. Although best known for its Pre-Law Summer Institute “boot camp,” CLEO provides services to high school, pre-law, and law school students which include mentoring, placement assistance, academic counseling and support, scholarships, and bar prep orientation. CLEO has produced more than 10,000 alumni who have excelled in every area of the legal profession to include judges, corporate attorneys, law school deans and professors, practitioners, politicians, and more.