Ohio, Pennsylvania and West Virginia have solidified their place atop the natural gas production food chain, and this growing dominance is showing no signs of slowing down. Doubters of the potential of this world-class resource now seem like a distant memory and operators continue to more efficiently develop the resource.

The Marcellus and Utica shale formations found across the tri-state region have become the largest sources of natural gas and natural gas liquids in the world. Now, new research shows that energy production from these sites will grow exponentially over the next 20 years.

According to IHS Markit, 41 percent of the natural gas produced in the U.S. will come from this tri-state area by 2040, up from 31 percent this year. Other profitable natural gas liquids, such as ethane, propane and butane are expected to nearly double in production over this same period. By 2040, production of those liquids in Ohio, Pennsylvania and West Virginia will account for 19 percent of the nation’s total by 2040, up from 14 percent in 2018. 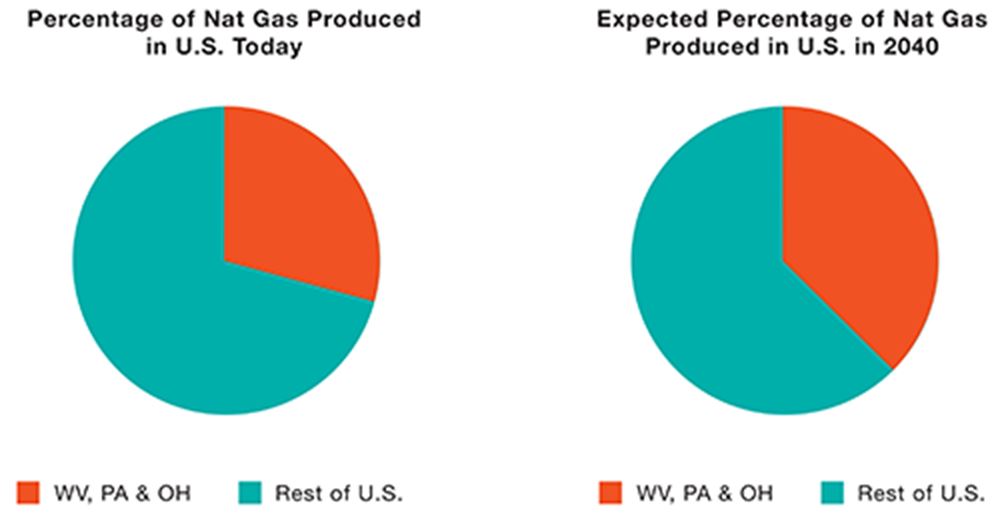 We’ve seen this regional dominance coming for some time now. Natural gas production across the tri-state area has grown significantly over the last several years by the U.S. Energy Information Administration’s count. In fact, the Marcellus Shale area recently surpassed Texas in natural gas production earlier this year, a development almost no one thought possible a decade ago.

The economic advantages of producing natural gas as well as the abundance of the natural resources in this region are largely to thank for this growing boom in production. Never before have we seen an area where the supply, manufacturing facilities and energy end users are in such close proximity to one another – and it’s all thanks to the entrepreneurial spirit of the men and women in the oil and gas industry.

According to the IHS Markit analysis, these cost advantages make the Marcellus and Utica shale regions among the most cost competitive natural-gas-producing locations in the U.S. Compared to the Gulf Coast, natural gas producers in this region are expected to realize between 6 and 26 percent in cost savings.

Combined with the nation’s increasing reliance on gas and the natural resource’s favorable economics, energy production in this area of the country is experiencing unprecedented growth. These trends are attracting the attention of investors. Officials from Ohio have indicated the abundance of natural gas and gas liquids has drawn in additional projects as companies seek to expand and construct new production plants in the region.

New technology and innovation are making the production of natural gas in this region less expensive and more accessible than ever before. The U.S. has made massive strides in becoming a self-sufficient energy producer over the past several years, and the tri-state region is the key to our nation’s energy independence. The next step is bringing this vast resource downstream, enabling the cost-effective energy supply to reach more consumers through various fuels, petrochemicals and other products. But no matter what stage of the supply chain, energy companies are wise to start considering West Virginia, Ohio and Pennsylvania as a location for their next construction project. The opportunities are abundant today, the demand is high and the economics are favorable.

Public and private leaders now face an historic opportunity to continue to build off of prior job-creating investments in the region to attract new investment through smarter and more predictable permitting, tax policy and highlighting the region’s vast supply of available sites for new construction.